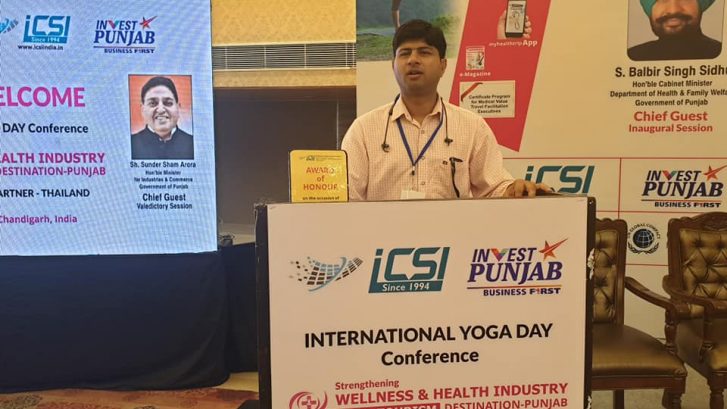 Dr. Shridhar Aggarwal is Indian Ayurvedic Physician, Ayurvedic  Doctor in North India He has been Awarded by Honorable Minister of Punjab State Sh. Balbir Singh Sidhu for his contributions to society. He also has been honored at various forums and has been a regular speaker on health shows on many TV channels & All India Radio.

He was born on 8th September 1981 in the industrial town of Punjab named Ludhiana to Sh. S. K. Aggarwal, an SBI Bank Manager. He did his schooling at Shishu Niketan Senior Secondary School, Chandigarh.  After he cleared his Medical Entrance test, he did his graduation from Shri Dhanwantry Ayurvedic College & Dabur Dhanwantry Hospital affiliated to Punjab University Chandigarh in 2004-05. It is reported that he learned rasa Shastra from a very eminent vaidya of India Sh. Balendu Parkash from Dehradun. His first work experience after graduation was with Dabur India Limited at Baddi Unit where he gained knowledge about Ayurvedic Pharmacopeia parameters and How Pharma Industry makes Ayurvedic products.

He also learned how to maintain quality & taste in Ayurvedic Medicine which matters the most. He also gained experience on how HPLC and heavy metal analysis is done. After this, he joined The Himalaya Drug Company at Bangalore in 2006. He joined there as Medical Consultant North Zone. He tried to analyze how Ayurveda can be researched & applied to Modern Disease and Lifestyle.

The Himalaya Drug Company is known to sell researched products all around the globe.  While working in Himalaya Drugs he got double Promotion in one year and was inculcated as Manager Scientific Division. Later, He became a technical hand in delivering CMEs to doctors. His Area of Expertise was of Ayurvedic Herbs and Medicines.

He delivered lectures in Many Multispeciality Allopathic Hospitals in Delhi like AIIMS, Hinduja Hospital, Ambedkar Hospital, Rohini & Laxmi Bai Hospital East Delhi as well. He has been Advocating the science of Ayurveda to all parts of North India. During his stay in Himalaya Drug Company, he got accolades from various doctors & Company. He left Himalaya Drugs in October 2008.

He was very keen on doing research on Ayurvedic herbs and working on diseases that are considered untreatable in Modern Science. Keeping that spirit he set up his clinic and started his own practice. He opened a branch in the name of Dr. Aggarwals’ Ayurvedic Panchakarma & Research Centre in Vicinities of Chandigarh i.e. Mohali. He used all his expertise and knowledge and developed few herbal formulae and treatment techniques which work on all chronic diseases like Cancer, Diabetes, Kidney Failure Heart Blockage.

Today he has more than 15 years of experience in treating chronic disorders like Skin (Psoriasis/Eczema), Hypothyroidism, High Blood Pressure & others.  He was again offered a Post of Consultant, Punjab in The Himalaya Drug Company in 2010. He served the Himalaya drug Company for 2 more years. He has participated in a lot of medical camps with various organizations including Schools and Corporates to support a socio-economic cause.

He is a regular speaker at various Channels, Radio Shows including the Sanjeevani program at All India Radio at Chandigarh and Kurukshetra also.  For information on Ayurveda and Ayurvedic Medicine, he has a youtube channel on his name Dr. Shridhar Aggarwal, and he is the Best Ayurvedic Doctor in North India.