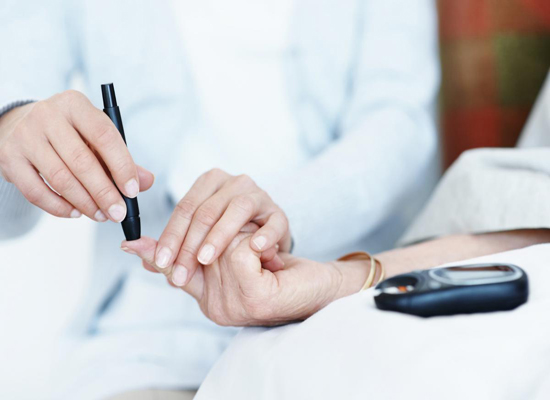 Diabetes is a group of metabolic diseases in which a person has high blood sugar, either because the pancreas does not produce enough insulin, or because cells do not respond to the insulin that is produced.

There are three main types of diabetes mellitus (DM).

How does Ayurveda Have a Role in Controlling Diabetes?

Ayurvedic Medicine has a definite & scientific role in controlling & curing Diabetes type 2 in some of the cases if it is lifestyle induced.

Untreated diabetes can cause many complications. Acute complications include Diabetic Ketoacidosis and Nonketotic hyperosmolar coma. Serious long-term complications include Cardiovascular disease (ischemic heart disease, blockages), Chronic renal failure, and Diabetic Retinopathy (retinal damage). Another risk is Diabetic neuropathy, the impact of diabetes on the Peripheral Nervous System — most commonly causing numbness, tingling, and pain in the feet, and also increasing the risk of skin damage due to altered sensation. Together with vascular disease in the legs, neuropathy contributes to the risk of Diabetic foot.

Ayurveda has the answer to all these problems & we have successfully treated many such cases.

According to Ayurveda, there are 20 forms of Diabetes (Prameha): 4 are due to Vata, 6 results from Pitta and 10 are caused by Kapha. But Diabetes (Prameha) is mainly Kapha doshaja disease. All forms of diabetes if not treated, eventually develop into Madhumeha (Diabetes Mellitus).

Ayurvedic treatment for diabetes involves some basic medication and lifestyle management programs. ayurvedic treatment for Diabetes stops the insulin resistance in the body. It Repairs, rejuvenates & revitalizes b cells of the pancreas which are already overburdened due to the use of oral hypoglycemic drugs like Metformin.