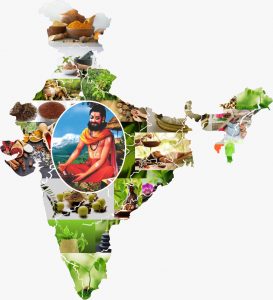 Ayurveda is one of the oldest & pranic systems of medicine, which works to balance the body’s life energies, referred to as the doshas. ‘Prana‘ is the Sanskrit word for life force.

Ayurvedic Treatment is one of the Traditional Holistic Healing methods which has roots in the Indian subcontinent. It is based on the trust that health and Well-being depend on a delicate balance between the mind, body, and soul.

The history & main classical Ayurveda texts begin with the transmission of medical knowledge from God to intermediates and then to human physicians. In the available textbooks like ‘Charak Samhita’ it is written that Lord Dhanwantry (Ayurveda God) taught Ayurvedic medicine knowledge to Charaka & group of physicians including Charaka.

Charaka is believed to have flourished in the sixth century B.C. The same wise text is also available in ‘Sushruta’. In Ayurveda, tridosha theory has been described. In this Medicine, dosha balance is emphasized, and a lot of information and guidance is also given for maintaining harmony/samyavasatha.

Lots more has been written on lifestyle improvement & suppressing natural urges which is considered unhealthy and claimed to cause a lot of illness. In Ayurveda medicine world, eight components exist & is known as ‘Astang Ayurveda’ means “the medicine that has eight components” (Skt. चिकित्सायामष्टाङ्गायाम् cikitsāyām aṣṭāṅgāyāṃ).

It is first found in the Sanskrit epic the Mahābhārata, ca 4th century BCE. The components are: • General medicine, medicine of the body, Kāyachikitsā • The treatment of children, pediatrics, Kaumāra-bhṛtya • Surgical techniques and the extraction of foreign objects, Śalyatantra • Treatment of ailments affecting ears, eyes, nose, mouth, etc. (“ENT”)- Śhālākyatantra • Pacification of possessing spirits, and the people whose minds are affected by such possession- Bhūtavidya • Toxicology- Agadatantra • Rejuvenation and tonics for increasing lifespan, intellect and strength- Rasāyantantra • Aphrodisiacs and treatments for increasing the volume and viability of semen and sexual pleasure. Vājīkaraṇatantra Diagnosis in Ayurveda Ayurveda has eight ways to diagnose illness, called as pulse (Nadi) , Urine (Mootra), stool(Mal), tongue (Jihva), speech (Shabda), touch (Sparsha), vision (Druk), and appearance (Aakruti). Ayurvedic practitioners approach diagnosis by using the five senses. For example, hearing is used to observe the condition of breathing and speech.

The study of the lethal points or marman marma is of special importance. Traditional medicine, including Ayurveda, contributes significantly to the health status of many communities and is increasingly used within certain communities in developed countries.

Traditional medicine has a long history of use in health maintenance and in disease prevention and treatment, particularly for chronic diseases. Ayurveda is a holistic system of medicine that cures diseases of the root. Also, if taken judicially and under expert ayurvedic doctor guidance, it has no negative side effect.

Tridosha theory is more vast and has answers to many diseases which are unexplainable and idiopathic etiology in Allopathic Medicine. The world is moving towards Ayurveda as all bacteria are getting immune to the antibiotics and antibacterial available. In near future Researches will be going on to find new ways to deal with infections as current antibiotics will be obsolete.

Ayurveda is a futuristic science that is now being researched by the western world. Scientific studies prove the efficacy of all herbs written in our classical texts. About 240,000 American adults use Ayurvedic medicine.

It is said that the originators of the Ayurvedic system of medicine did not base their practices on the experimental method, by this, it is meant that there are no records of studies in anatomy, physiology, pathology, and pharmacology. But the development of surgery the classifications of disease, the observations on signs and symptoms, prognosis and the descriptions of the nature, toxicity and therapeutic value of drugs as described in the literature all clearly demonstrate a high level of knowledge which would not have been possible for men without the scientific approach.

One thing we should not lose sight of is the fact that the men who gave the system to the world were drawn from the highest intellectual and spiritual hierarchy. Their motive was compassion.

Their purpose to alleviate human suffering and their recorded precepts were for their disciples whom they trained for the service of humanity. Most of the herbs which are present in that available here.

The oldest and largest suppliers of Ayurvedic Medicine are present in India, the knowledge of making medicine is written in various granthas which is essentially passed from generation to generation. e treatment of all acute and Chronic Diseases are abund.

There are four basic qualities mentioned in Ayurveda for the best treatment.

1st The best one required for Ayurvedic treatment is “aushad” which is widely available in the Indian subcontinent. Different types of soils available in all tropical areas of India are best suited for the growth of herbs.

The environment and Climate is known for quality herb production are only limited to India. You will not find variations of 6 seasons in any other part of the globe. The Herbs grown in the Himalaya region & forest of southern India have the best phytochemicals & other medicinal qualities, which can heal the ailing patient. The best time According to the season to harvest herbs is also written in Ayurvedic texts.

2nd best thing is the processing of medicine written according to classical texts. All medicines were prepared in that era using indigenous techniques and it has been proved that these techniques are equally important to make the herbal formulas efficient and patient-friendly.

The same technique is still used in India to manufacture different Ayurvedic Formulations.

3rd & most important element required is the experienced Ayurvedic Physician which you will found here in India. Knowledge and experience of Ayurvedic physician help to understand patient medical condition & select the proper herbs and herbal formulations for the best treatment. Around 70% of India has taken Ayurvedic Medicine at some point in life.